Moyra Stewart has worked in clay for more than forty years after graduating from Edinburgh College of Art in 1979. While living in Canada for 20 years she taught and was also involved in many community projects and residencies, particularly with children. Returning to Scotland in 1999 she co-founded the Steeple Arts Co-Op which in partnership with WASPS became the “The Steeple” studios and community arts facility in the old courthouse Newburgh, Fife. She now works from her home studio in Auchtermuchty.

Primarily a hand builder, Moyra also uses slab and press moulding techniques to reproduce her oval sculptural vessels. She has perfected a multilayered Naked Raku technique that resembles Gneiss, an ancient rock found in the west coast of Scotland. The timeless solidity of this pattern seems more an integral part of the piece than just a decorative surface.

Moyra has exhibited across the U.K., in Canada and Japan. She was awarded Craft & Design Maker of the Year in 2015.

“My relationship with Nature is a deeply felt, enduring connection. Throughout my life I have found solace and comfort in wild places, retreating to forests, mountains, and beaches when daily life has become overwhelming.

“What I make is my response to the challenges in life, the personal journey that is taking place at a deep level in all of us. My work emulates aspects of the natural world, where nothing is perfectly round. I work using ovals, where curves move and there is a careful asymmetry. As it is with things that grow, where their shape responds to the prevailing wind and its relation to location, so my shapes evolve organically.

“I hope to make soft clay look like stone that is billions of years old, the clay is fragile but it looks hard and solid. I am interested in these contradictions. In all of my work I look to embrace the unexpected, to be open to change, to see it transform my work into something beyond the ordinary. I strive to make vessels that feel as though they are alive and vibrant, objects that resonate in the mind and the hand.” 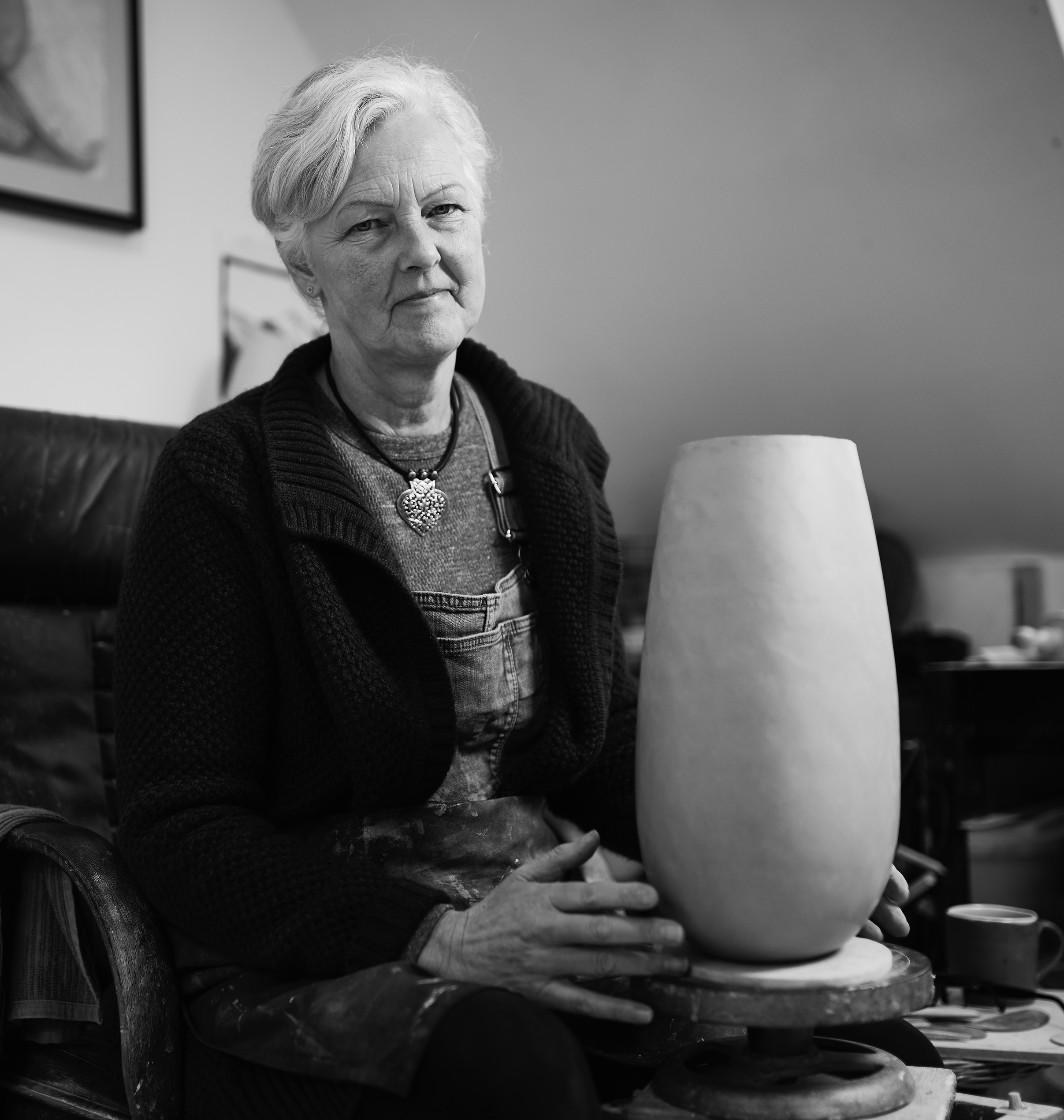 What is Naked Raku?

The process of Naked Raku is temperamental like nature; control and skill alone will not guarantee a successful result. With patience, diligence and attention, some work will make it through the fire unscathed and transformed into objects that seem almost to have sprung effortlessly into life.

Watch the video here for an insight into the process.

How is it made?

All my Naked Raku work is made by hand, using flat coils. Sometimes I press slabs of clay into base moulds that I have made and continue the form with the coils.

Coil building is slow work but even slower is the process of working the surface over the whole piece as it grows, to bring the final form to a completely smooth finish. I do this using wooden and rubber ribs of different flexibilities starting with the stiffest and ending with the softest.

I prefer to work with oval forms because there is an organic element in the finished work that more completely echoes forms in nature. This also makes reproduction very difficult as no two pieces are ever exactly the same.

I  have developed a method of finishing some pieces with a turned over top to give the impression that the form is thick and heavy like a piece of carved stone. The turned top is made as a separate collar which is formed and finished completely before being joined into to the body of the piece. This is an exacting process which requires that both body and collar be at the same state of moistness : otherwise they will dry and shrink at different rates and possibly crack.

After the piece is finished and fully smoothed I let it dry out completely before painting on a layer of terra sigillata. Terra Sigillata is a slip made from the micro particles of clay (used extensively by the Greeks in their black figure ware). This can give the finished piece it’s slight sheen and also a deeper contrast between the blacks, whites and greys.

How is it glazed?

Unlike normal raku where the glaze stays on the piece and is often richly coloured, in naked raku  a layer of liquid clay slip is applied underneath the glaze and this enables everything which is put on to come off in the end.

In the process of learning this technique and exploring different things I had a test tile come out with these wonderful tonal gradations. I just had to try and replicate the  finish on my three dimensional work not least because it reminded me of the patterns in rock.

To achieve these different grey tones I apply multiple layers of both slip and glaze in different thicknesses. If I want larger black areas I use liquid latex to mask this before anything else. Latex is not easy to use but I find that if you use coarse brushes and dip them in soft soap (used in mould-making) before the latex it is possible to wash the brush afterwards.

I use a viscosity cup to calibrate the slip to a precise thinness (or thickness) for the different layers but as these layers are poured a lot depends on the speed and evenness of pouring. It is the way that the smoke penetrates the different thicknesses that gives the variety in tones.

The work gets fired in batches in a small kiln outside. Like normal raku you watch the ware come up to temperature and when the glaze starts to melt in a particular way you pull it out with tongs. That is usually at about 860 degrees. It goes into a metal bucket with wood shavings and a lid is placed over the top. The heat of the piece burns the wood and the dense smoke penetrates the layers of slip and glaze, turning any bare clay dense black. After the piece cools it is pulled out and all those layers are rubbed off, with a cloth and lots of cold water. It takes a while for the piece to dry out, until finally you get to see it fully finished. It is called “naked “ raku because all the layers of glaze and slip that are applied, come off in the end until all that is left is clay.

Working with fire is spiritual, fire has a life of its own, there is danger : when you load the kiln and turn on that gas burner you are committed you must see the firing through to its completion and you must pay attention. Working outdoors as I do the weather is a factor too, the wind can change in an instant and suddenly the kiln temperature can drop. So many unknowns come into play when you do raku. More still when it’s the naked variety.

But it’s addictive and the results when they work are amazing.

I have often contemplated just why raku remains so popular and I believe it is that direct raw experience of being outdoors and that elemental experience with fire : all your senses come alive. You get to watch the glaze melt and you decide when it is ready. I am in love with that relationship I have with the flame and the heat and the challenge of conquering a technique that seems almost to defy mastery.

Raku first originated in 17th century Japan and was quickly co-opted into the culturally important rituals of the tea ceremony, because it was unpretentious and aesthetically pleasing and it embodied the ideas that were so important to the practice : simplicity, harmony and restraint.

In 2011 Bernard Leach attended a tea ceremony and raku firing in Japan and it was this experience which excited him so much that he became a potter. Later at the Leach Pottery he introduced raku firings where visitors could glaze and fire a pot to attract people to the pottery. The practice of raku in the west took an entirely different path to that of Japan and the east. In the west we began using coloured glazes which can give fabulous metallic and irridescent colours, and in the 1970s and 80s it became very popular.

The use of a resist slip underneath glaze is relatively recent and probably pioneered by the famous American raku potter Paul Soldner quite accidentally when he noticed that a slip painted underneath glaze produced an interesting effect.

The process of Naked Raku is even more taxing than normal raku but it has an allure that is simply magical.

Your Naked Raku is a work of art and should be treated carefully. It is low fired and porous and fragile. It will NOT hold water, however if you want to put flowers in the vessels simply insert a waterproof plastic bag inside and fill that with water. The bags from boxes of wine are ideal, cut down plastic milk containers are also good as the tops are easily cut with scissors and they bend nicely to fit different sizes.

Please do not put your Naked Raku in a spot where it will get continual bright sunlight as this will eventually fade the patterns.

Do not leave the piece outside in the winter, because the clay is porous it will get wet and if it freezes it will crack. If the piece gets wet the markings will go dark, don’t worry once it dries out it will lighten again. This may take a day or so depending on the temperature and size of the piece.

You can find my work at ;

I generally exhibit at :

Due to problems with an arthritic thumb my output has slowed and I am not taking on new gallery commitments. You can visit my home gallery by appointment or contact me directly if you wish to buy any larger pieces. 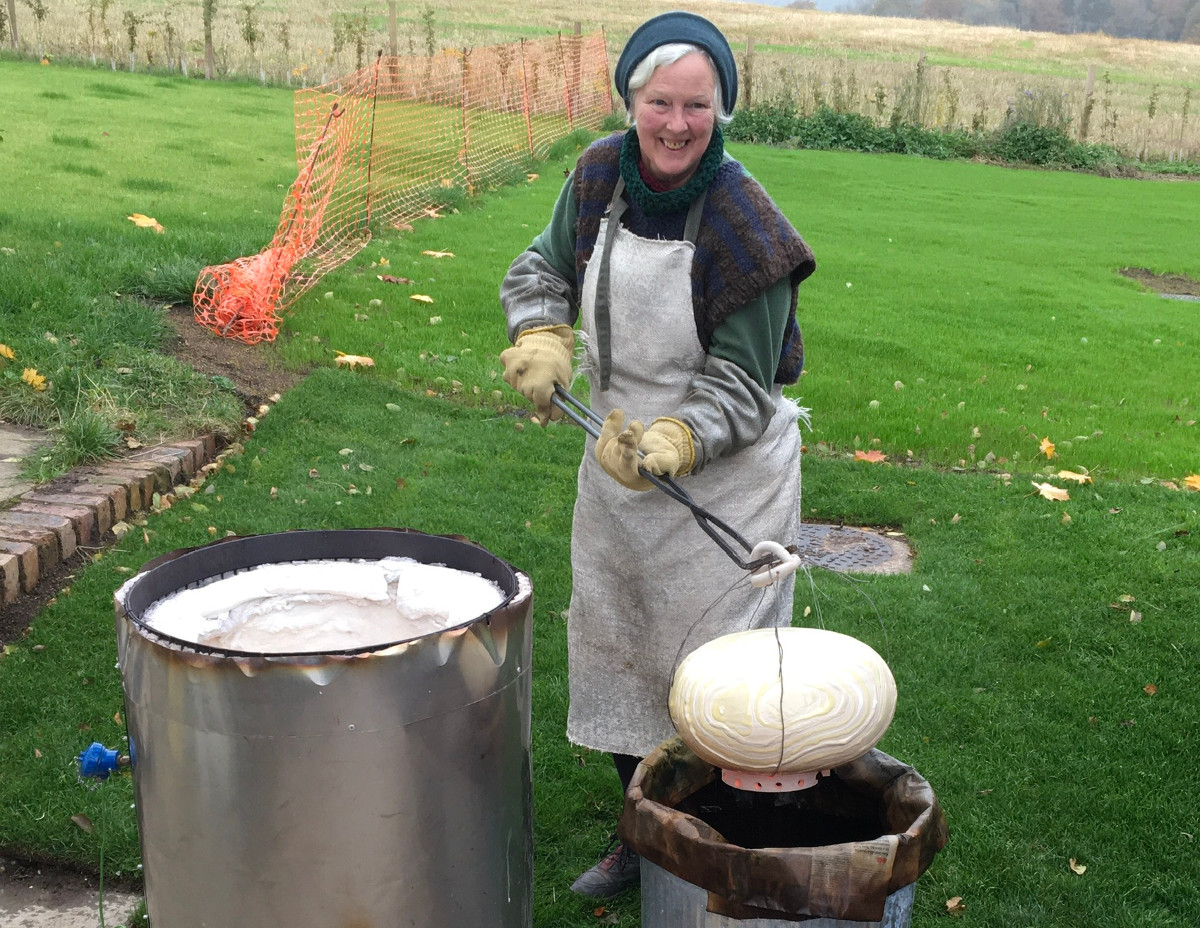 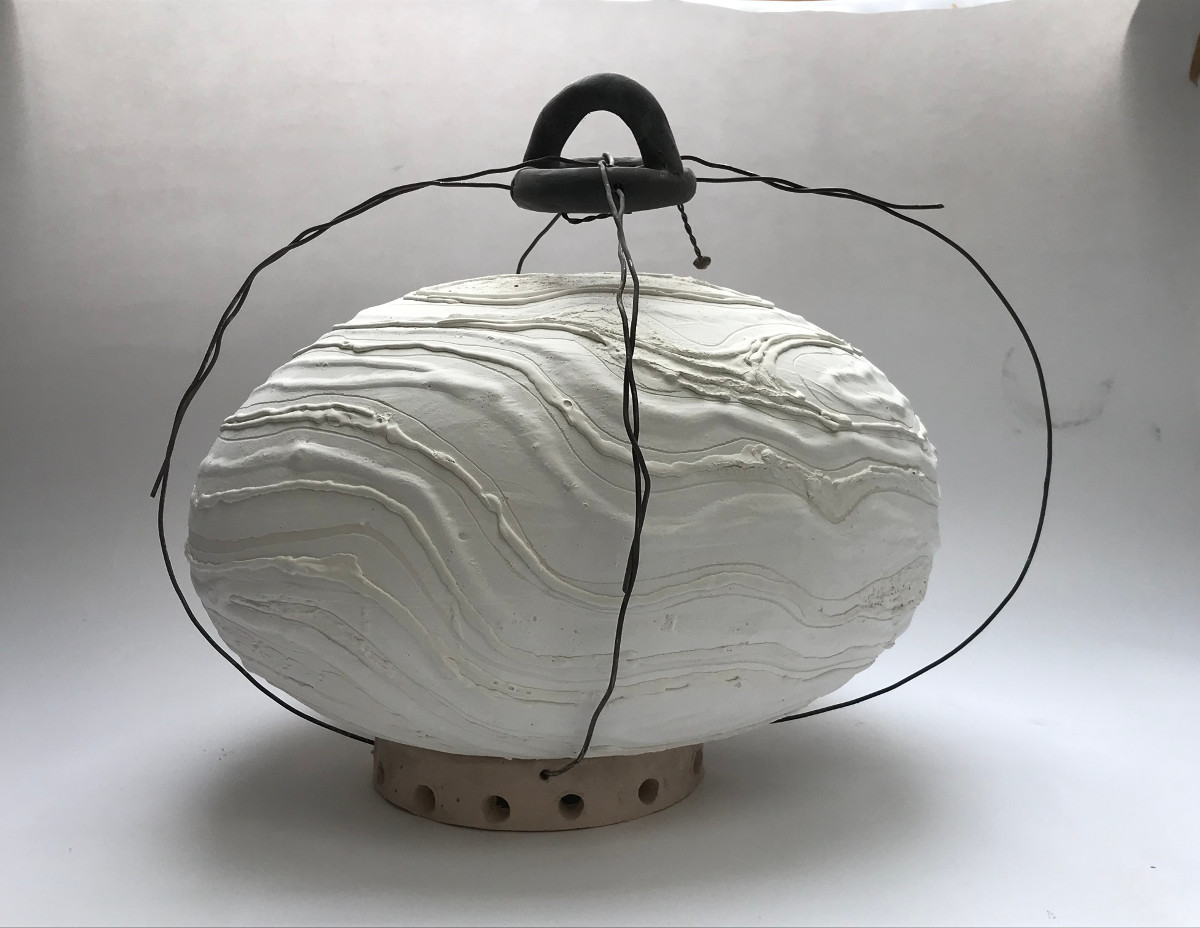 Store is closed for now. From April 31st to May 2nd 10.00a.m. -6.00p.m…my studio will be open for Open Studios North Fife 2022. For more information please check out : www.openstudiosfife.co.uk We are venue 37. Come and say hello. Dismiss